Corner House garden is located in a small town in north Buckinghamshire. The house was built in the early 1980s with a small back garden.  1/4 acre of land to the east was bought later. We think this land was originally the builders’ yard and we have discovered that under much of the central lawn there is a layer of concrete varying from 45cm to Im below the surface. Presumably this was hardstanding for lorries. This could account for the fact that when we bought the house 6 years ago all planting – mainly shrubs – was around the edge of the garden and the ‘lawn’ was of very poor quality. In the top left corner you can just see a small area of 6 fruit trees behind a low fence. 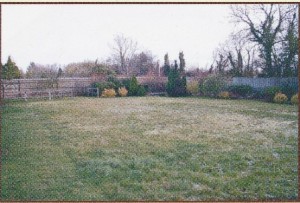 We bought the house so that we would have an interesting garden to work on, our previous houses having only small gardens. This was quite a challenge!

To design or not to design

I think the best way of tackling a fairly blank space is to design the whole garden in one go and gradually work the garden up to the plan. However, we didn’t do this for two reasons. Firstly, we would never have been able to agree on a design. My husband favours seeing the whole of his ‘estate’ in one go, whereas I prefer smaller ‘rooms’. Secondly, we are gardeners whose first principle must be economy and it isn’t easy to make a garden look good fairly quickly if you go for the design the whole thing approach but can only make slow progress with planting.

The first summer, in 2005, I simply planted the large number of  herbaceous perennials and herbs that I had brought from our previous garden. These went into an existing, but empty, bed in the small back garden. Other than that we simply mowed the grass, looked, thought and argued, and played badminton in our big  space. In 2006 the men of the house dug some vegetable beds in front of the fruit trees. They dug up so many bricks that they made a path all around the beds with them.

In November we had a bonfire party and built our fire in the centre of the grass, giving us an interesting problem in 2007. The simplest thing to do seemed to be to make a bed on the burnt area and since I had a lot of box cuttings it was an excellent place to use them. We filled the hedged areas with lavender. We made some significant changes that year, making a path around the garden, installing a summer house, so that we could sit in the dry and see our garden (there are no house windows overlooking the 1/4 of an acre), and erecting a rose arch near our larger pond. We also planted two trees in the grassy area, a Crateagus laevigata ‘Paul’s Scarlet’ and a Sorbus ‘Wisley Gold’ with lovely yellowy/orange berries. This is when we discovered that we had the concrete platform under the lawn, that there were very few places where any large rooted plant could be grown and that drainage was always likely to be a problem. We considered having the whole garden dug up and the concrete removed, but decided against it – too disruptive we thought.

2008 saw the development of two new vegetable patches and everything seemed to grow rapidly. The greenhouse came a year later.

I decided to grow horseradish and Good King Henry. They were later dug up as they were much too enthusiastic growers.  The herbaceous border came into its own. 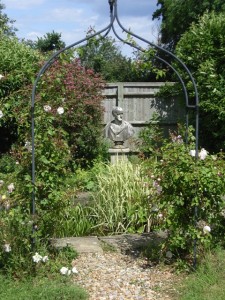 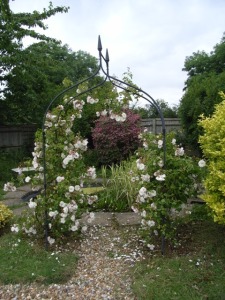 The border behind the patio had been full of convolvulus and Jack by the Hedge and was planted with pulmonaria and bergenia for ground cover in 2009. Unfortunately I didn’t completely get rid of Jack by the Hedge. 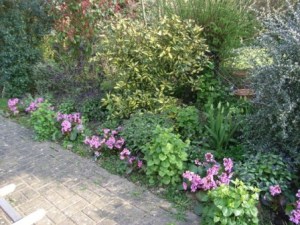 2010 was the year that I started growing flowers from seed. There is something so satisfying about this and the flowers are a joy. Dahlia were the unexpected success of the year. 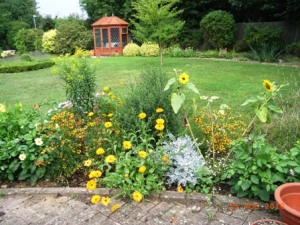 In 2010 the garden was starting to look quite mature.

June was a wonderful month and the roses looked fantastic. Cecile Brunner is seen here behind the herbs.

2010 also saw the introduction of two new beds next to the central box bed. One is a rock/alpine garden and the other a herbaceous garden. Both are focussed on herbs or cultivars. 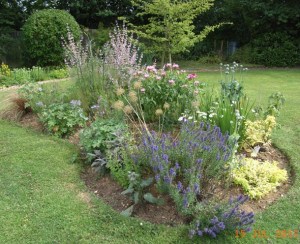 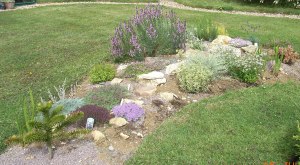 2 thoughts on “About the garden”