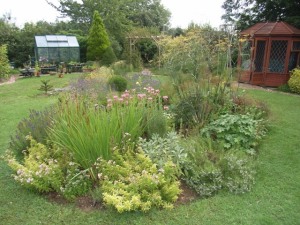 August in the garden in previous years

I love looking back in my garden journal and reading about how the garden performed in previous years. It is amazing how easy it is to misremember and think that last year’s crops were better than they were. In fact now that I have started this blog I am not writing in my journal as much, which is a pity, and I must get going again.

I notice that in August 2011 the weather was rather wet after quite a dry summer. Generally speaking the vegetables were good, although I recorded the runner beans as being affected by black fly and only growing slowly. The apple crops last year were fantastic and so were the plums, a green variety which is ready in early August.

Most of my entry for that month was about gardens we had visited and one in particular stands out for me –  Stone House Cottage Garden near Kidderminster. This is an unexpected little treasure and very quirky. The owner bought a cottage and then built follies and castellated towers around, which have created wonderful warm walls for all manner of climbing plants. It is very much a plantsman’s garden and much of the planting was lost on me but it is very charming and shows what can be done to create different planting situations. The garden is in the RHS members handbook, the website is www.shcn.co.uk, it has a small nursery and is well worth a visit.

At the end of August 2010 I recorded that ‘the drought is well and truly over’. The apple trees had not done well with only two in fruit – the Bramley and another that might be a Discovery. We had hardly any plums. So the fruit situation was similar to now, although the apples we do have this year look poor specimens.

I am noticing that most years the runner beans take ages to get going and are usually afflicted by blackfly, slugs or something else but that by October they are cropping well. Plenty of time for them to improve then. We had our first 4 beans today. I just love them. 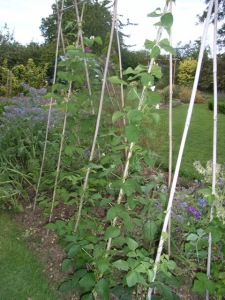