March being pleasantly warm there were quite a few butterflies around. The brimstone is always the first about in the spring and a very welcome sight. This year we also saw quite a few peacock butterflies. I hope the cold weather in April has not been too bad for them. 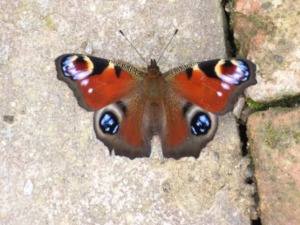 Peacock butterfly sunning itself on the path

The frogs had their usual sex fest (it always seems a little later in this garden than others) and left masses of frogspawn. About two weeks ago there was still mostly a squirming mass of hatched tadpoles on top of the water lily but now they have all gone, and looking yesterday I couldn’t see a single one swimming about.  Something similar happened last year and I can’t tell where they are going. In previous years there have been tadpoles and small frogs galore. There are various predators in the pond, of course, including newts and dragonfly larva but I can’t believe they could have taken all of the tadpoles by now. Are they hiding or has something else happened to them, I wonder?

The larger pond has probably given me more pleasure than any other part of the garden. Particularly when new here, I spent hours watching pond life. It is so charming to see what seems like a whole other world. It looks delightful but it is a nasty world of predations. One year I spent some time catching water boatmen and flinging them into the undergrowth, believing that they were too numerous and fearful for my tadpoles. I found out later they could fly. Now I leave well alone. To protect the aquatic wildlife I never use chemicals anywhere near the pond.

1 thought on “The wild garden”